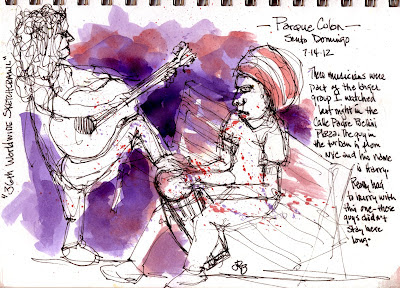 July 14, 2012, the last day of the Santo Domingo USk symposium, and the 36th WWSketchcrawl. Earlier I noticed the guy in the turban sitting on this bench. He wasn't part of the symposium, but he had his sketchbook out and he was sketching. I sat down beside him and started asking questions. His name is Harry and he is from NYC. He told me he was with a group and they would be performing later in one of the clubs here at the Parque Colon. I quickly learned the group he was with was the group of musicians I had watched the night before in the Calle Pedro Bellini Plaza. Fabulous, these guys. We talked a bit more and I moved on. Not long afterwards I hear some music, turn, and see a small group of the musicians creating some of their Caribben style music and they are surrounded by the USKers in the park. I was late arriving to the scene so was only able to capture these two, the guitar player, and Harry.

Thanks to Jim Richards for the idea to toss in some color to hopefully enhance the energy and fun these guys were having.
Posted by Jim Bumgarner at 8:17 PM