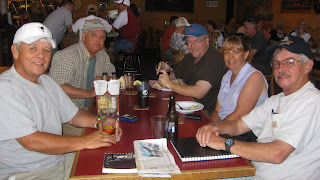 This morning at 9am we met in the parking lot at the "509 Artspace" without much of a plan as to where we go sketch. After some discussion, we decided we liked Jan's idea of heading out north of town to her friend Dennis Wise's farm.

Once there we found, in addition to some cows, horses, turkeys and goats, this marvelous old 1928 Chevy truck, flat tires and all, sitting in the middle of his driveway. Soon all four of the guys were sketching it.

It was rather hot today as the summer sun was blazing high in the sky (check the shadows in the pic), and firing off some rather severe rays.

Jan found a nice shady spot near the fence and worked on her pastoral scene. Greg also found some shade near the barn and ended up producing a sketch of the truck from an interesting perspective.

Dave, Bob, and Jim braved the summer sun in the dusty driveway.

Afterwards we drove back into town to the Ice Harbor Brewery where we had lunch, a few libations and some great conversation. (L to R: Jim, Dave, Greg, Jan, and Bob.)

Hope you can join us next time.
Posted by Jim Bumgarner at 11:26 PM No comments: