We met in Columbia Park this morning at 10am under sunny skies and warm temperatures, in the parking lot near the sno-cone vendor. After some "art-talk" we laid out our plans and went right to work sketching the trees, the river, some of the people, and the sno-cone vendor.

What fun it is to meet up with people with common interests to share ideas, thoughts, and our work together.

Today it was Greg, Dave, Jan (from Connell), and Jim. Pat was with us for a while as he brought his oil painting from our outing at Lampson Yards a few months back so it can be hung with the others in the show at the "Phatty Caddy Coffee Lounge" next week.

Stay tuned for our June outings when, tentatively, we are planning trips to both Maryhill Museum and Walla Walla. Hope to see you then!

The image is Jan's lovely little sketch of one of the big tree clumps.
Posted by Jim Bumgarner at 7:52 PM No comments: 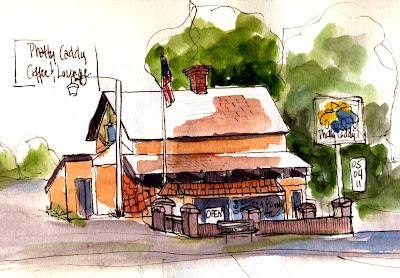 Tammy Furth, owner of the "Phatty Caddy Coffee Lounge" in Kennewick has opened her walls to the "509 Urban Sketchers and Painters" for the "First Thursday Art Walk." This means our work will hang there during the month of June.

Anyone who has been out sketching/painting with us is welcome to bring down 3 or 4 of their sketches/paintings and have them hung that day.

This isn't fine art, so no one is expecting expensive frame-jobs. Cheap is the only way to go, some of us are using $3 frames from Wal-Mart, and other are using frames purchased from St. Vinny's; or don't frame at all. It doesn't really matter.

Click pic for map to the "Phatty Caddy Coffee Lounge."
Posted by Jim Bumgarner at 9:47 PM No comments: 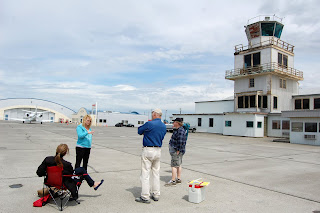 We awoke this morning to gray skies, cool temperatures, and rain (see Nancy's comment below).

Thinking no one would show up, but knowing that if only one did, someone should be there to meet and greet, Jim drove over thinking he would meet with host, Malin Bergstrom, and reschedule the event. As soon as he pulled into the parking lot, Greg approached him, and within a few minutes, five more people were there.

The skies stayed gray, but the air-temp warmed up and the rain stopped, so we ended up having another great outing.

"Thank you" to Malin Bergstrom, president of Bergstrom Aircraft, who provided escort into the flight-line side of the grounds for us to sketch the "Old Naval Air Control Tower" from an angle not open to the general public.

In the picture above, Malin is getting us caught up on not only the old tower, but also on some very interesting local aviation history of the area. Did you know that United Airlines was born right here in the Tri-Cities? We didn't either!!

Hopefully our efforts will in some small, or large, way help Malin and her committee to "Save the Tower" for future generations.

Click on the picture to see some photos. As more arrive in our inbox, we'll be posting more.
Posted by Jim Bumgarner at 8:34 PM 1 comment: