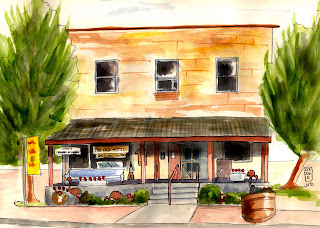 When we arrived at the Old Hotel Gallery this morning, they were actually waiting for us. They had a room set up for us to use, if we wanted, which we didn't because we planned to be outside with our sketchbooks.

Heidi took us on a great tour of the 99 year-old building and told us about it's somewhat sordid past; then she invited us to the wine tasting later in the afternoon and gave us a map showing where to go to find the Sandhill cranes. We drove out into the pothole area and marveled at the beauty of the scablands with all the basalt outcroppings and other geographical features. We found a large flock of the birds, but we weren't allowed to get close enough to do any sketching of them. We did a little sketching of some of the basalt, took some photos, and drove back into Othello around 2pm.

On our way back to the Old Hotel Gallery, which we had planned to sketch when we got there, we decided to stop into a local tavern to try out Othello's version of "tav food." While there Nancy received a call from one of her sisters in Nebraska telling her that her father had experienced a brain aneurysm and was in ICU. Since Greg drove up in his truck and Nancy rode up with me, she and I immediately headed for Pasco.

On the way, she got another call - her father had passed away.

She was scheduled to leave this coming Friday morning for three weeks in China to visit her daughter. I just got news from her a few minutes ago that she's off to Omaha tomorrow and will return on the 20th, so I am assuming she will leave Omaha in a few days and head on to China.

Greg stayed a while and after showing them that nifty portfolio of his work he carries with him, he was invited to be their featured artist this coming May. Congratulations, Greg! After the stories we heard about the Old Hotel today, we had already commented that his work is particularly well suited to the place!

We send our prayers and condolences to Nancy.
Posted by Jim Bumgarner at 8:57 PM No comments: 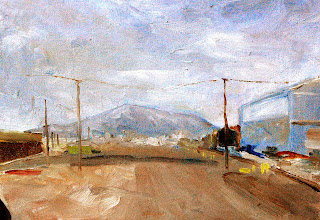 On this date we drove across the river to the Pasco side and went to Lampson Yards to draw/sketch/paint whatever we could find there.

This oil painting features Rattlesnake Mountain in the far distance from the yard. This beauty was painted by Pat Fleming.

Click the picture to be whisked away to our flickr site where more pictures are posted.
Posted by Jim Bumgarner at 9:09 PM No comments: 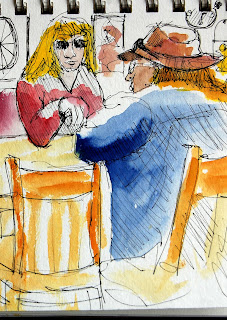 Urban sketching involves sketching anything and everything one finds of interest in and around the communnity. Today we went to Clover Island, a manmade island that is surrounded by the waters of the Columbia River at Kennewick, Washington, USA.

Afterwards we found a local pub for lunch and sharing of our drawings. While there, Jim sketched a couple also enjoying lunch at the table next to ours.

Click here to travel to our flickr site where some photos of our outing can be viewed, or click the image.
Posted by Jim Bumgarner at 8:50 PM No comments: 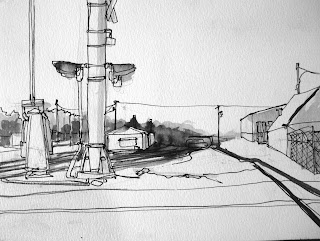 On January 22, 2011, the "509 Urban Sketchers and Painters" participated in the 30th World Wide Sketchcrawl. Sketchcrawls were originated by Enrico Casarosa in San Francisco a few years ago and the phenomenon has grown world-wide since. There are three or four World-Wide Sketchcrawls held each year.

This image was created by Nancy Thurston.
Posted by Jim Bumgarner at 8:33 PM 1 comment: