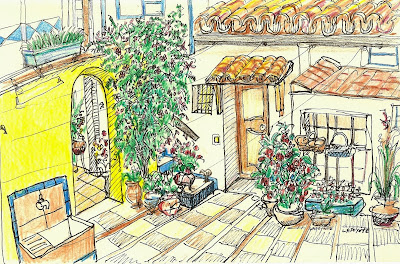 View from our apartment balcony where we dried our clothes. This is the inner garden of the apartments.
I went to large for the picture.
Posted by Lapoynte at 8:34 PM 1 comment: 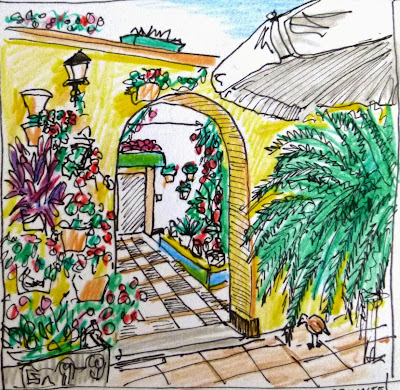 Finally I can share some of the sketches I did in Jerez Spain. This is the entry, after the street gate, into the Bar Parron apartments. The bird is a pet of the owners.I made the picture x-Large, I hope that's right?
Posted by Lapoynte at 8:30 PM 1 comment: 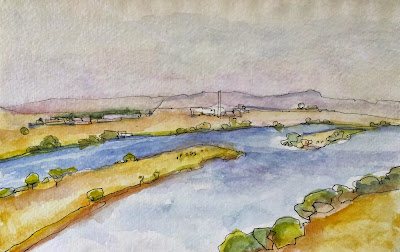 Thought I might share that through this website, I sold the rights to use this little sketch to a company doing contracting work out at the 'Area'.  I was contacted here for permission and that's Super Cool!  Hmmm, I should have asked how they came upon it!
Posted by Nancy at 3:04 PM 3 comments:

After a three year hiatus, the Fiery Foods Festival returned to downtown Pasco this weekend. Three of our sketchers took the opportunity to head over and catch some of the action:  Ed David, Renae Favor, and Jim Bumgarner.

Just about the only thing that some of us found "fiery" was the heat of the day.  There was only one small Mexican Food vendor and the line was way too long and the workers way too slow.  The local newspaper did mention two vendors: one was selling freshly roasted hot peppers from New Mexico, and the other a concoction of cucumbers, onions and jalapenos, grown in his garden in Kennewick. In previous Fiery Foods Festivals a much greater selection of Mexican foods were available.

We were thereat the beginning of the scheduled 8 hour event (noon), so the crowd was a bit sparse and the bands way too far apart. The thing that caught our attention was the large two-story building on one of the corners and opposite it a shade tree to hide beneath.

Posted by Jim Bumgarner at 10:34 AM No comments: