Hello All!  We have been invited by the people in charge of the Pasco Cinco de Mayo festivities to come out on Saturday, the FOURTH of May, to downtown Pasco to draw at the festival.  We will start at 10:00 am and draw until noon and then stop and have a taco or 2!

Show up when you'd like (earlier if it's hot!) and meet at noon on the extreme SouthWest corner of the Pasco Farmer's Market area and we'll share our drawings and have some lunch (should be plenty to chose from!).

RSVP if you think you'll be there and I'll let Ana know how many of us she can hope to run into somewhere throughout the morning.

Think of the COLORS!  Think of the interesting goings-on!  COOL!
Posted by Nancy at 8:53 PM 1 comment: 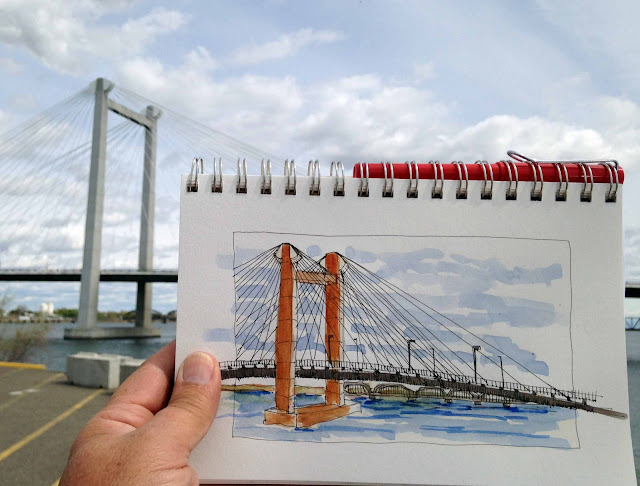 This is the "Cable Bridge" which spans the Columbia river between Pasco and Kennewick, Washington.  This bridge replaced the old "Green Bridge" that was built in the early 1900's and was here when I was a high schooler.  After they build the Cable Bridge, next to the old Green Bridge (a two-laner), there was considerable community conversation about what to do with the Green Bridge.  Some said tear it down, other said put it on the National Registry, others said they didn't really care.  while the conversation went on, and on, the old Green Bridge just up and fell into the river one day.  Problem solved.
Posted by Jim Bumgarner at 2:45 PM No comments: 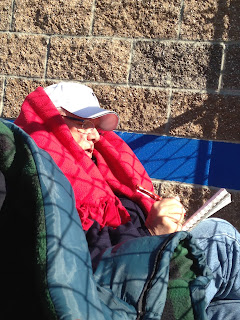 The 39th World Wide Sketchcrawl began at 8am for me this morning when my grandson, Aidan's, baseball team had a game.

The sun was nice, but the wind was cold, cold, cold!!

I dressed in multiple layers, wore my heaviest coat, and draped this blanket over my back, and still nearly froze while doing some sketching of the kids and the field.

The kid sketches are like many I've posted here and elsewhere, so I haven't posted them here.  In fact, I quit sketching after a while but then remembered, hey, this is a WWSK day, so I reopened my sketchbook and sketched out the view straight in front of me. 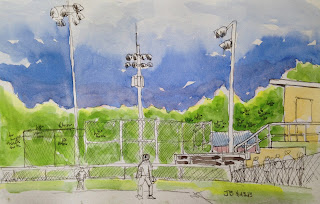 It's this one: the view behind the 1st baseman from my point of view.


Since I had announced the WWSkcrawl would begin at 10am this morning, I left the game before it ended so I could meet whoever might show up.


I parked in the parking lot where we were to meet-up and positioned my truck directly across the street from the third sketch down. 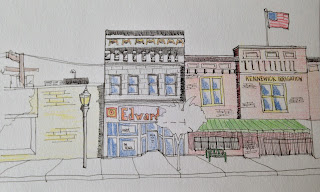 What is now Edward Jones was, a long time ago, a very popular men's clothing store, "Lantor's Men's Clothing."  I bought my first pair of Levi's in that store when I was about 14 years old.


The sketch was done with colored pencils, something I never, never, do.  I still don't know why I used them.  The watercolor set, brushes, and water was right there in my bag, but for some unknown reason I used the colored pencils instead.  I don't like it. Wish I had used the watercolors.  Oh well. 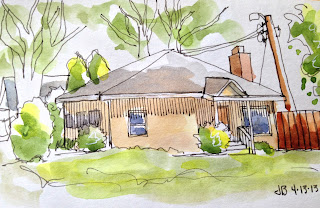 The last sketch is an old house that sits on Clearwater in west Kennewick.  I had a burrito at Tony's Taco Truck and spotted this old place out my windshield.


The house sits in the midst of an old trailer park and a small forest of huge sycamore trees that were there when I used to ride my bike up and down Clearwater....late '50's.

I'll bet it never thought it would go worldwide.

I had a good day sketching.

Oh, yes, LaPoynte was the only other person to show for the 10am sketch, but he quickly disappeared. I guess he got cold, too. 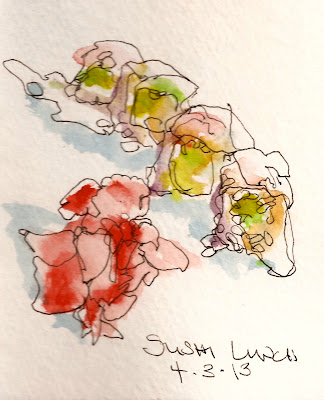 "JAMES BOND ROLL" - as good as it sounds - with a little pile of ginger.
I loved the soft pastel colors and the organic shapes on this plate! 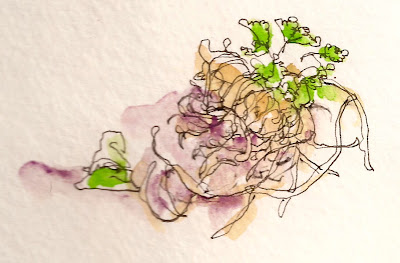 This white shaved stuff is always in the neatest little pile, topped with parsley
and green wasabi on the side...
This, too, made for a lovely little still life. 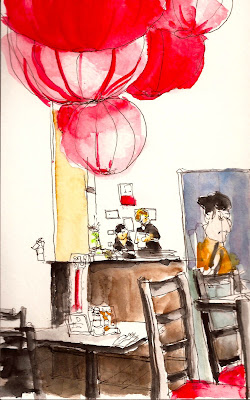 Before Osaka moved in I spent 2 full days hanging red paper lanterns solid all over their ceiling.
When Ok and her husband (the owners) saw what I had done,
they were a little shocked and overwhelmed, adding their own 'stuff' to the walls.
Personally, I think the lanterns were enough...
(That's Ok behind the counter - the short one.)
Posted by Nancy at 8:24 PM 1 comment: 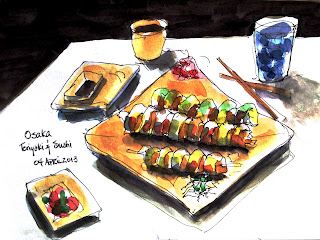 This morning Nancy and I met at her Osaka Teriyaki & Sushi Bar here in Kennewick.  Before the sketching began, we ordered a plate of sushi and some hot tea.

Like any self-reliant urban sketcher, once the food was delivered to our table, we got out our sketchbooks and started drawing.

Fortunately sushi doesn't come to the table hot, so we didn't have to worry about it getting cold. 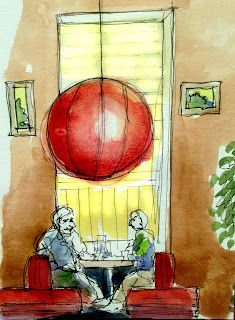 After the quick sketches, we pulled our chopsticks from their wrappers and started consuming this wonderful food.  It was as good as any I've had anywhere.  Mmmmmmmm.

My second sketch is of the two people sitting at the far table, beneath a large red, Japanese lantern.  At first drawing I wanted the lantern to be the focal point, so I made it larger than it really is.  Then as I got into the sketch and as Nancy offered a few pointers I began to realize the focal point should be the people at the table.

So after some lifting of the yellow color in the window, especially at the top, adding color to the wall and darkening it toward the bottom, and darkening the area below the table, and darkening the shadowed end of the benches they were sitting on, some of the focal point moves toward the people.  But I think most of it remains on that oversized lantern. 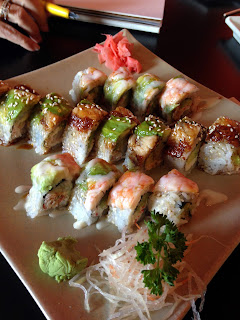 The bottom image is the plate as it was delivered to our table.  The sushi here is as good as you will get anywhere.  Certainly it is as good as any I have had anywhere, including the sushi I enjoyed in Japan a few years ago.

Definately a place to return to!!