Freezing rain tonight (the night before).  Treacherous roads. Too many cars in ditches.  We decided to stay warm and cozy, in our own homes, for the WWSketchcrawl with these suggestions: "draw your coffee pot, your shoes, your tv, your couch, what you see outside your window, your bathroom counter, your refrigerator, what you have for lunch, and/or ... whatever." ﻿

So, as Murphy's Law would predict, we got one of those lovely warm winds that sometimes blow through the PNW, and come morning of the WWSketchcrawl, about 10am, the ice was mostly melted off the roads.  Dave and Jim took the opportunity to head on out into the community.

The results are mixed, I think.  There's something about the stimulation of being out with a crowd that makes a difference.

Here they are, by artist's first name and images created.


These images are also posted on our FB page, here, and the WWSketchcrawl site. Yeah...we're there, together in spirit. 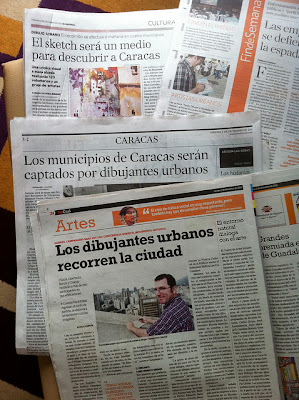 Gabi Campanario works for the Seattle Times.  Each Saturday he publishes a sketch and a short article about the place, event, or the people that he has included in his sketch.

Not many of us here in the TriCities read the Seattle Times and even fewer of us know about Gabi. However, it was Gabi that single handedly initiated the global phenomenon of the Urban Sketcher.

Four times a year they head out on the same day on the World Wide Sketchcrawls, initiated by Enrico Casarosas in San Francisco.

The most recent entry on his blog is this one where he was invited to Caracas, Venezuela, to help the locals artists get their city displayed in a more favorable light than its reputation had.

The really interesting thing here is how the local newspapers, radio, and television stations covered the event. That is Gabi on the front of the page entitled, "Artes."

If you would like to see what other cities are doing with their Urban Sketcher movement, check out some of the links in the right hand column.
Posted by Jim Bumgarner at 11:16 AM No comments:

We have two scheduled outings scheduled for January:  the 14th and the 21st.

Jan. 14th:  the destination we have in mind is back to the Starbucks on 395 and Clearwater, but if anyone has another place their interested in, we can go there. Let us know.

Hope you can join us on either of these two dates.