"Corvette Club in the Park"

The Corvette Club met today in the Columbia Park, Kennewick, Wa., so the USkTC group when down to see what was going on and to do some recording of the event in our sketchbooks.  There was over 130 Corvettes there along with lots of vendors and come noon, some mighty fine smelling foods were wafting through the crowd.  I went to Blimpie's and had a ham and cheese. 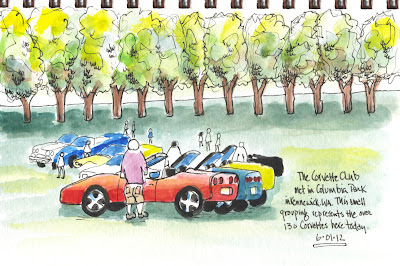 I'm not happy with either of these other than to say that I took Nancy's lead and drove to Hobby Lobby to purchase a sketchbook like hers.  It's a Strathmore, 5.5 in. x 8 in., 140 lb watercolor sketchbook and it really takes color much better than what I've been using. 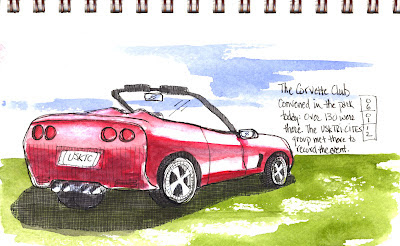 It's too bad "wonkiness" isn't looked upon in a favorable light.  Both of these sketches are in possession of plenty of it.
Posted by Jim Bumgarner at 4:41 PM