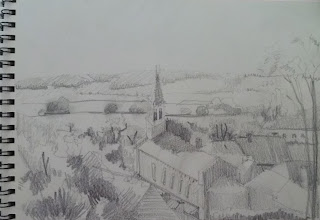 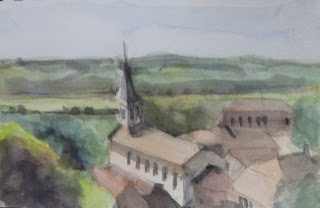 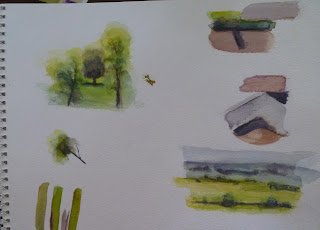 We found a gorgeous spot overlooking the town of Cormatin where we began sketching and doing some watercolor washes.

This pencil sketch was done after seeing the one my instructor, Ovanes Berberian, did - his was really great and I noticed how delicately he used his pencil and how he got such a huge variation in his grays, which is something I have a hard time recognizing.  Another key factor was the direction of his pencil strokes - you can't just scrub in the shading any old way!

The second is a watercolor sketch of the same view where I drew first with a pencil then did some washes of color over.  Ovanes pointed out the 'calligraphy' was too much the same in both buildings so after I took this photo, I remembered that and dulled down the back building.  It's important to not only dull it down but change the color of it too, which I didn't do.  So many small details but they really do make a big difference!  The sun was muted through high clouds so there wasn't a lot of contrast today, which makes for a less dramatic drawing - and to me, more difficult to make beautiful.

The last sheet is where I spent the most time.  I was trying hard to pick the hard spots (what wasn't?) but I had a hard time finding the slight variations in color and tone of the buildings along with their shadows.  The most trouble I had was finding the right greens - something covered the majority of the drawing!  I finally just laid my sketch pad directly on the grass and tried to match it (the 3 green stripes).  You wouldn't think green would be so tough until Ovanes told us that there is a realistic painter he really likes (Shishkin) who discovered 244 different green as he painted straight into the meadow!  I also worked on the distant landscape where Ovanes like the background (near the sky) and when I complained it was too dark he said the foreground green was too light!  AH!  You learn so much...