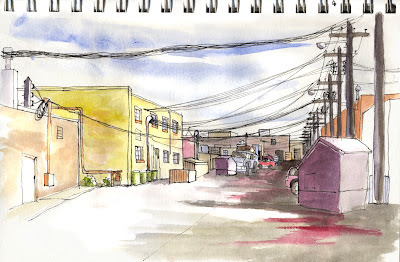 I had to drive over to Richland today and stopped in the Uptown area to see what I could see in terms of a possible sketch.  There's a sign that says, "No Public Traffic," so I pulled in and it curved in behind all the stores.  Uptown Richland, today, is a mere relic of the bustling commercial area it was in the '60's.  Then it was Penny's, Lawton's Clothing, nice restaurants, jewelry stores, etc., today it's a used bookstore, multiple taverns, and antique shops.  That's not all bad, but it isn't much for progress.  The stores are laid out in a large rectangle, probably a mile and half around, with this alleyway in the middle.  It's loaded with electrical lines, garbage cans, and delivery entry ways.  I think it's interesting.
Posted by Jim Bumgarner at 2:48 PM