The produce rack at the new Yoke's on Keene is drenched in the morning sunlight streaming through the big east-facing windows on the wall.  I decided I didn't want to try to capture the entire produce section as it is filled with way-too-many details; but I did want to capture the sunlight.  So, using some photoshop to darken the background, I offer up this group of tables filled with pomegranets, melons, plantains, cantaloupe, pineapple, and mangoes.  By the way, no one approached me, no one asked what I was doing, no one told me to leave.

Emboldened by my new found freedom, I picked up these three pomegranates and took them to a table where I had my coffee and bagel waiting, set them up as a still-life and sketched them.  My watercolors were in my truck, so I tried to capture the values by cross-hatching ink.  Colors were added a few minutes later when I sat in outdoor café area in that wonderfully warm sun.
﻿ 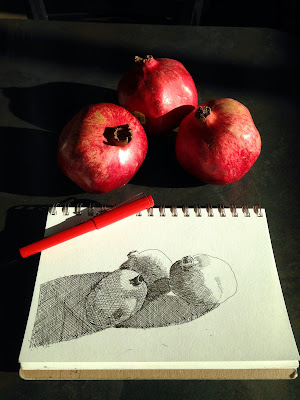 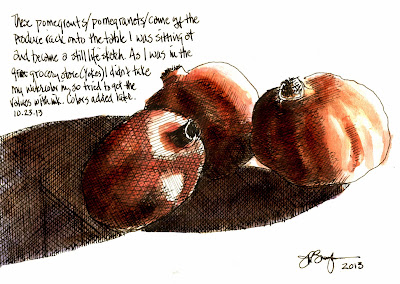