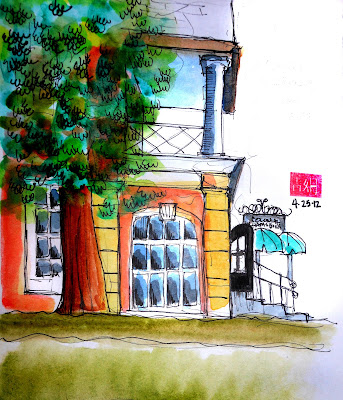 While our wives purchased tickets to the Colonial Williamsburg experience, I found a comfortable bench and sketched the Craft House across the street.  The Craft House sits along Duke of Gloucester Street which runs west from the Wren Building, situated on the University of William and Mary campus, to the old Virginia Capitol Building one mile east.  The City of Williamsburg has preserved all the buildings along the way and turned the far east end of the street from the Capital back to the Court House into live theatre.

We were treated like regular citizens of the city today as we marched, like a mob, from house to tavern to court house to capital building to watch as people prepared for war with the British: a harried wife whose husband had been captured; a black couple struggling with what the war would men in terms of the endentured servants plight, a black preature extolling the virtues of our God given rights to freedom; we even saw the Red Coats marching toward us from the west; and we listened to a rousing speech given by Benedict Arnold who rode back and forth on a black steed beside the Capital grounds.

We visited the oldest Episcopal church in the country where Thomas Jefferson, George Washington, and Martha Custin (the latter Martha Washington) attended.  We touched the very baptistry that George Washington stood over as he witnessed fourteen baptisms.

It was a fabulous day:  All this history that until today, for us Northwesterners, lay deep only within the covers of history books. 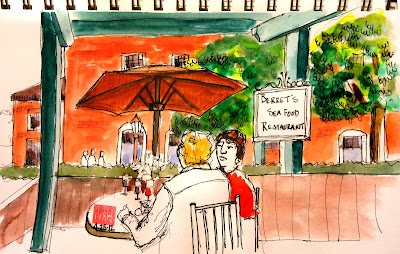 And of course, lunch was high on the list of importance as well.  Here we see a couple of ladies at an adjoining table to ours.  We enjoyed everything here from a catfish sandwich to a vegetable/fruit/cheese plate and soup of the day.  Even "she-crab" soup: google it.
Posted by Jim Bumgarner at 8:14 PM